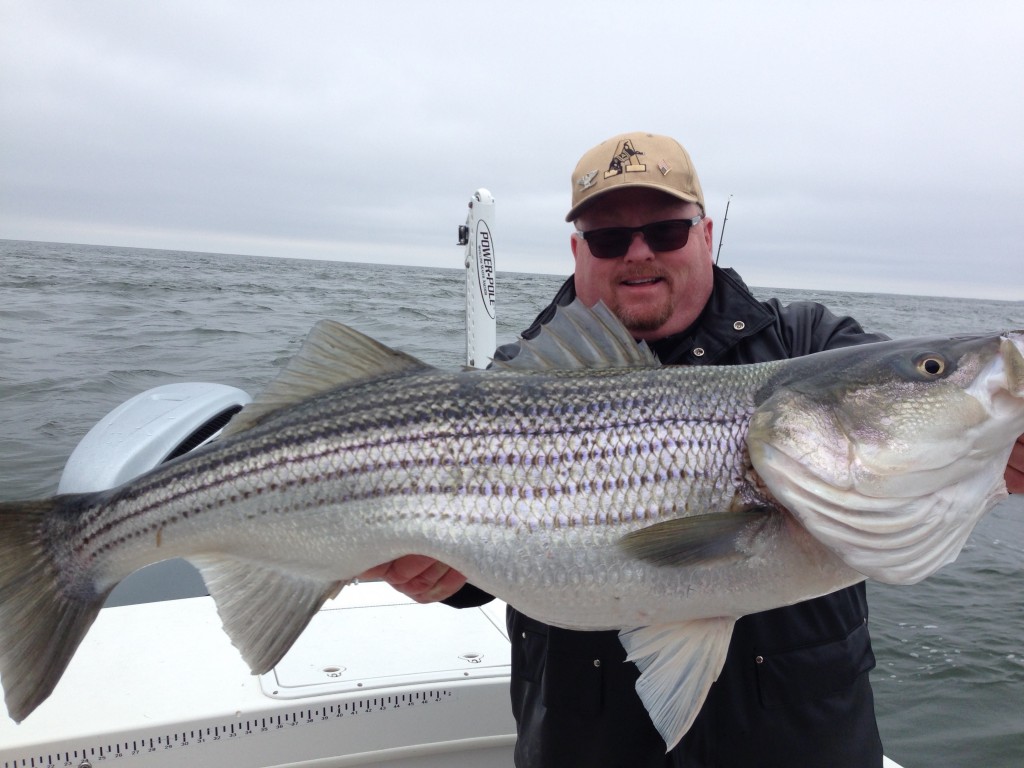 Mid March to early April was certainly the bulls eye for huge fish at Calvert Cliffs.  Now until the end of April huge fish are still possible but not quite as consistant as the prior weeks at Calvert Cliffs.  Water temps over in the eastern shore islands is certainly heating up great on sunny days.  The Bishops Head Buoy is reading over 60 degree water temps on sunny days.  A couple days of chilly and no sun drops the temp down to the mid- 50’s.  I’ve ventured over to the islands a couple times this week and have caught fish both times.  Nothing earth shattering but fish none the less!  Catching over there is a wonderful thing. 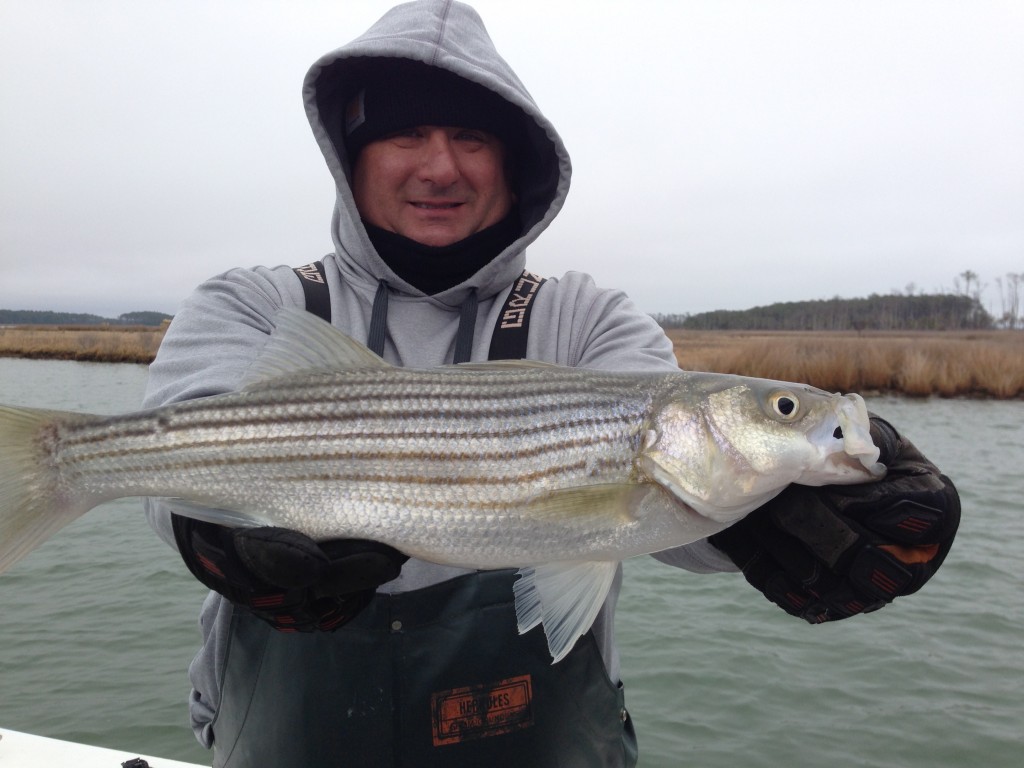 As fish start to spawn and move into the post spawn mode more fish and larger fish will start to set up camp in the shallow water of the eastern shore islands.  Historically Speckled Sea Trout move into the islands as well.  I’m not very optimistic about Speckled Sea Trout this year because of the huge winter kills of trout down in Virginia waters.  The kills were caused by extreme cold and Speckled Sea Trout inhabiting shallow water.  The extreme cold shocks the fish and they die.  Sad but a natural occurance.  What we need is about 4 normal winters in a row.  Would sure love for those big specks to be hanging out in our part of the world.  Time will tell!  No doubt some trout will be around but numbers will more than likely be on the low side.  Stripers on the other hand should be very abundant and willing to hit a number of offerings. 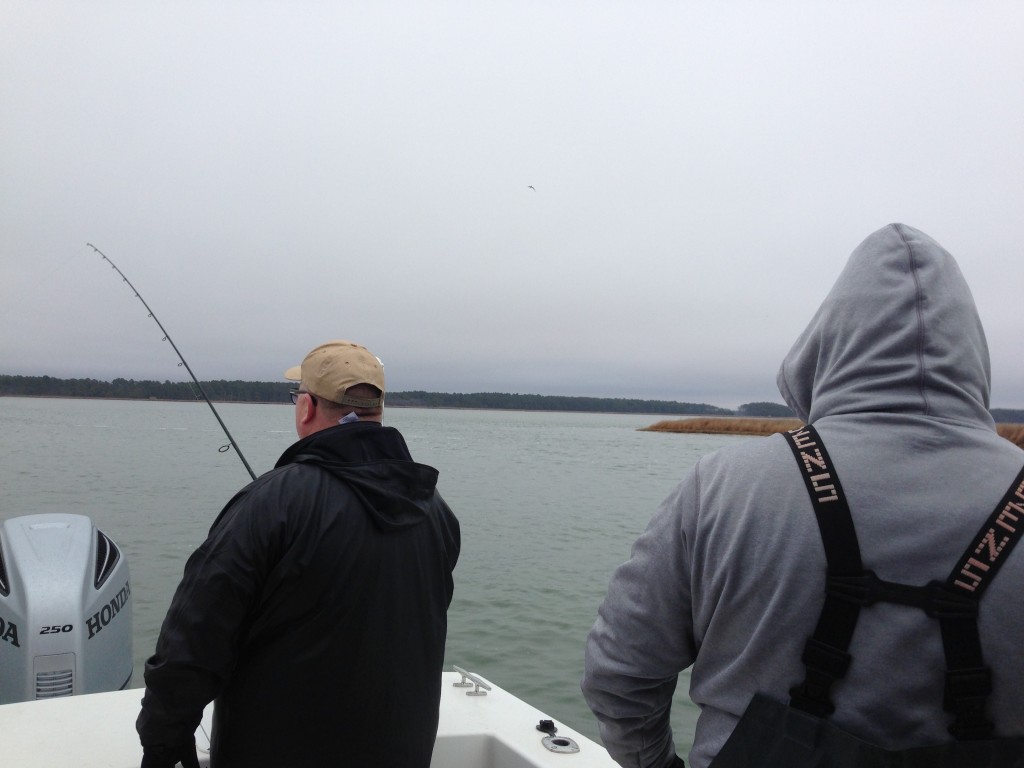 A couple of days ago I had the pleasure to fish with Amanda and Mike for the first time.  They drove in from DC and arrived before daylight to head out to hit the early bite.  Having fishing experience is good but the power plant current just before daylight can be a challange if you haven’t done it before.  Mike and Amanda were up for the challange. On the way out I tried to explain the technique as clearly as I could to the Rips first timers.  No sooner than we were out there with lines in Amanda hooked up with a great fish! Her Striper was a real good one!  I’ve been known to make a fish look a bit bigger than it may be for obvious reasons.  Amanda surely makes them look big!  Hers was a good 33″er and a real nice fight…..she did great! 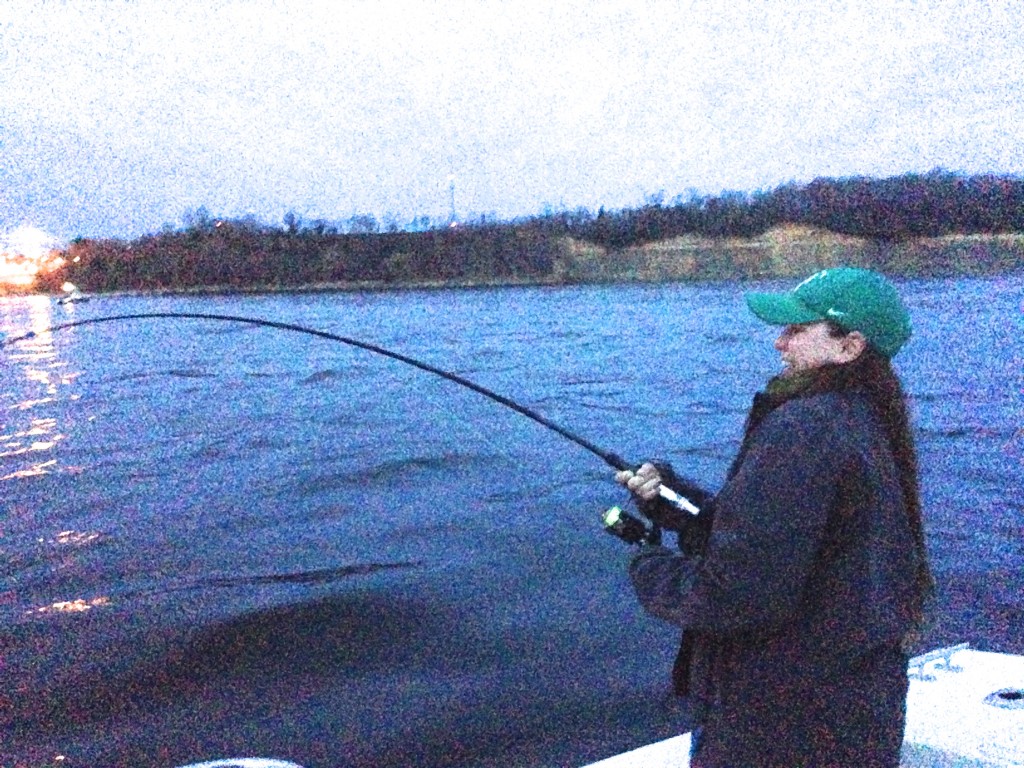 Amanda fighing a good one at daylight…….good stuff!

She did a spectacular job on the fight.  Quickly brought the nice fish to the boat where I lipped it, handed it to Amanda for a nice shot! 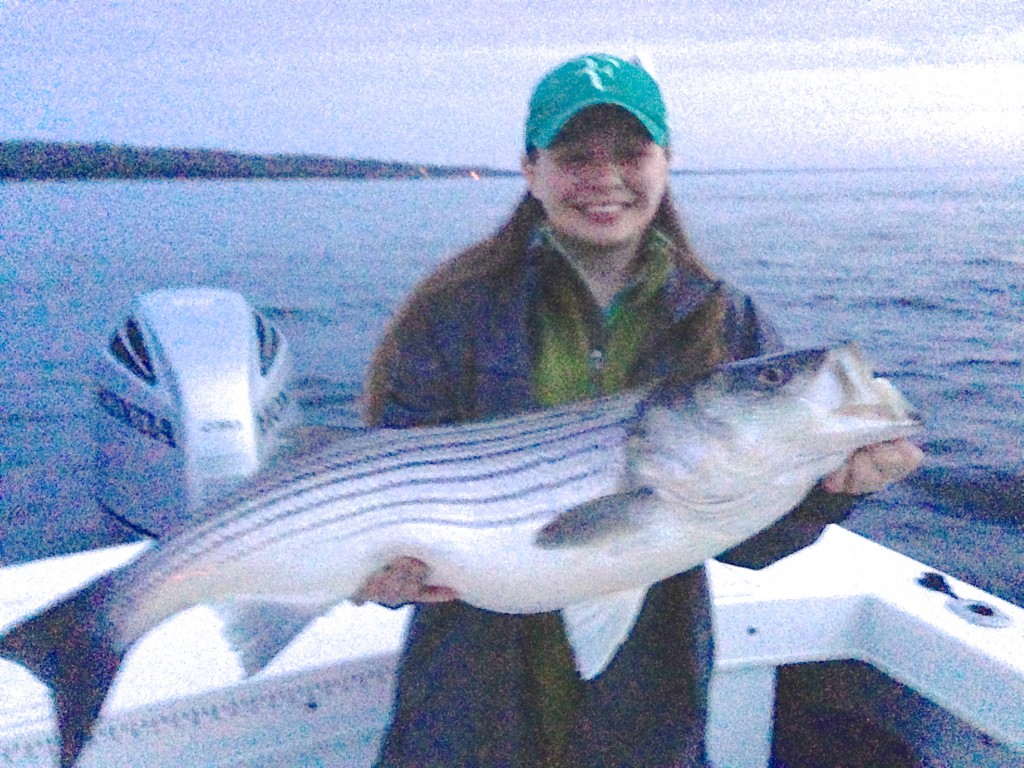 A great light tackle caught Striper for Amanda…..way to go!

A couple drifts later light was taking over the sky and Mike started hooking up on a regular basis.  He caught several nice fish but couldn’t quite beat the good one Amanda brought to the boat. 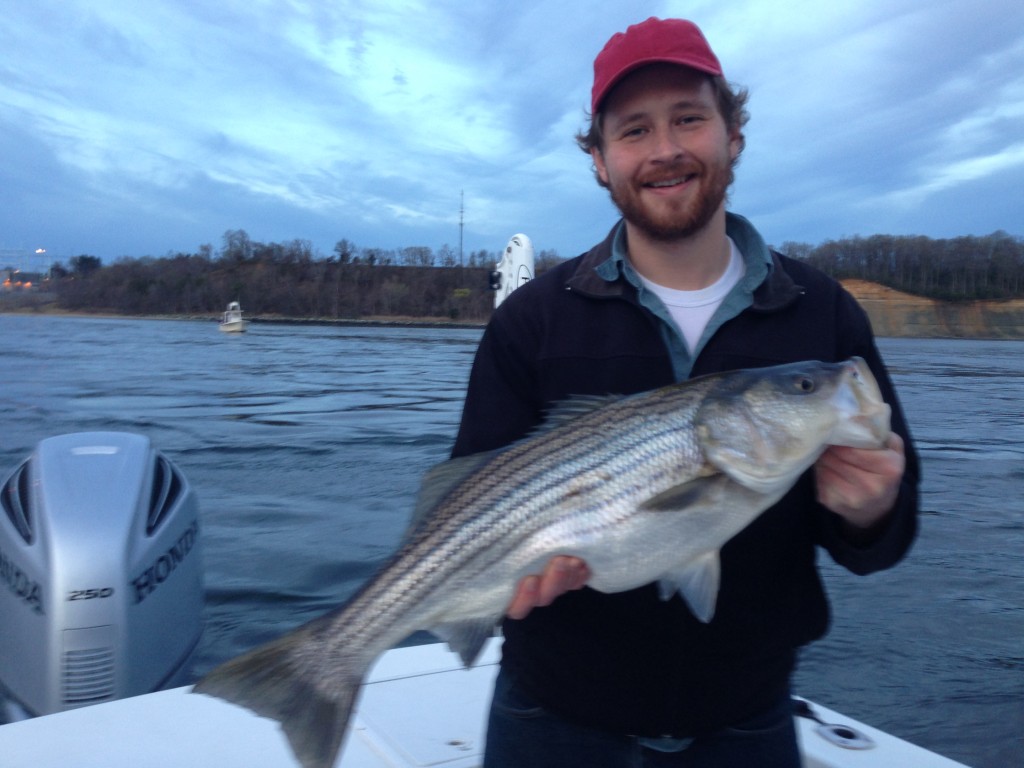 It didn’t take long and Amanda hooked another big one.  Lot’s of drag screaming, a really bent stick and an excited lady made for a great scene!  Amanda again topped the 30″ mark.  Not bad for a first timer at the rips! 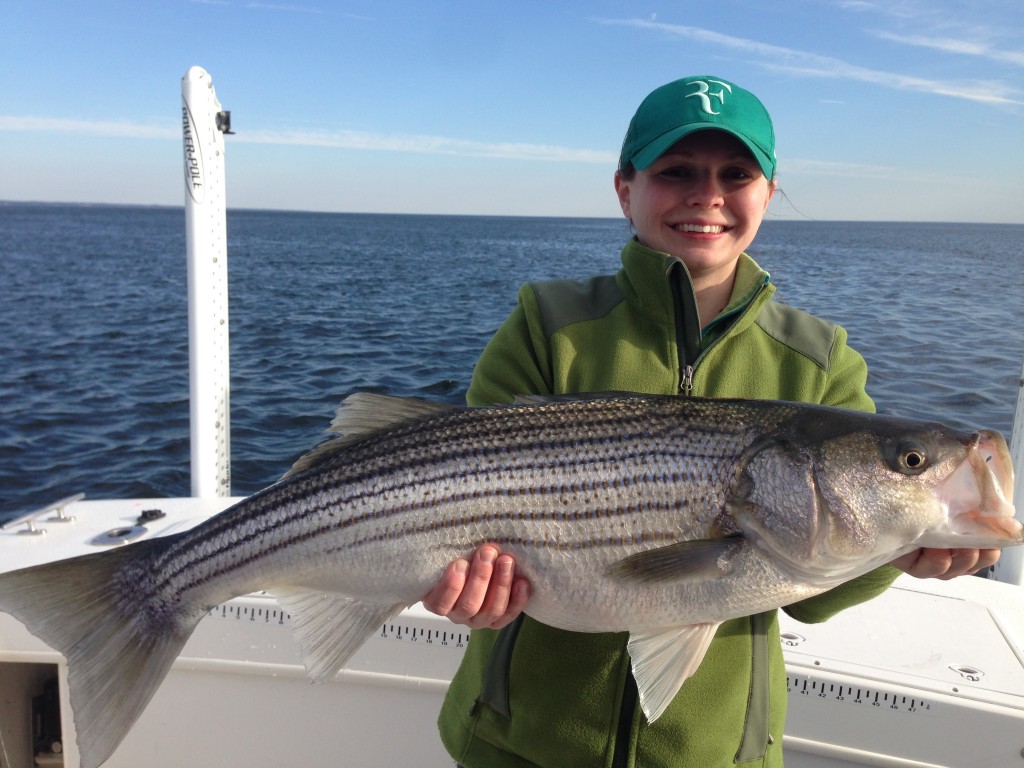 A great day indeed!  Decent weather, not to many boats and a reliable bite for a few hours equaled a great morning of catching Stripers on light tackle.  Every fish caught on this day lived to swim another day, nothing better!  Mike and Amanda did a great job slinging jigs loaded with Bust’m Baits.  Hope to see you folks again some day! 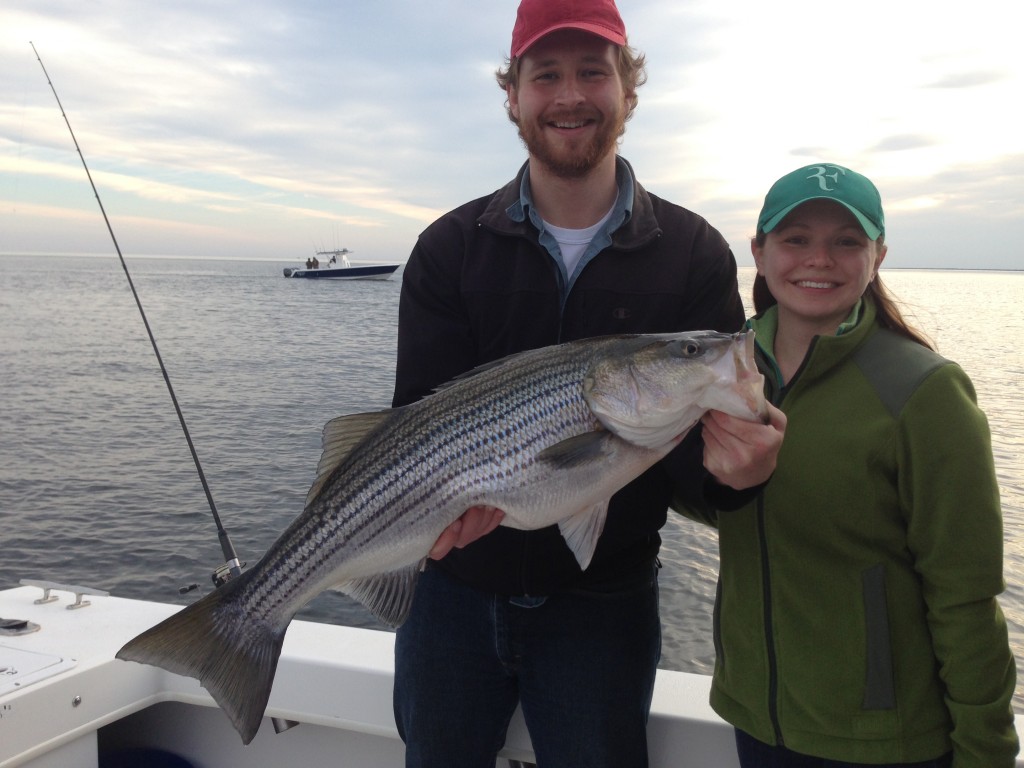