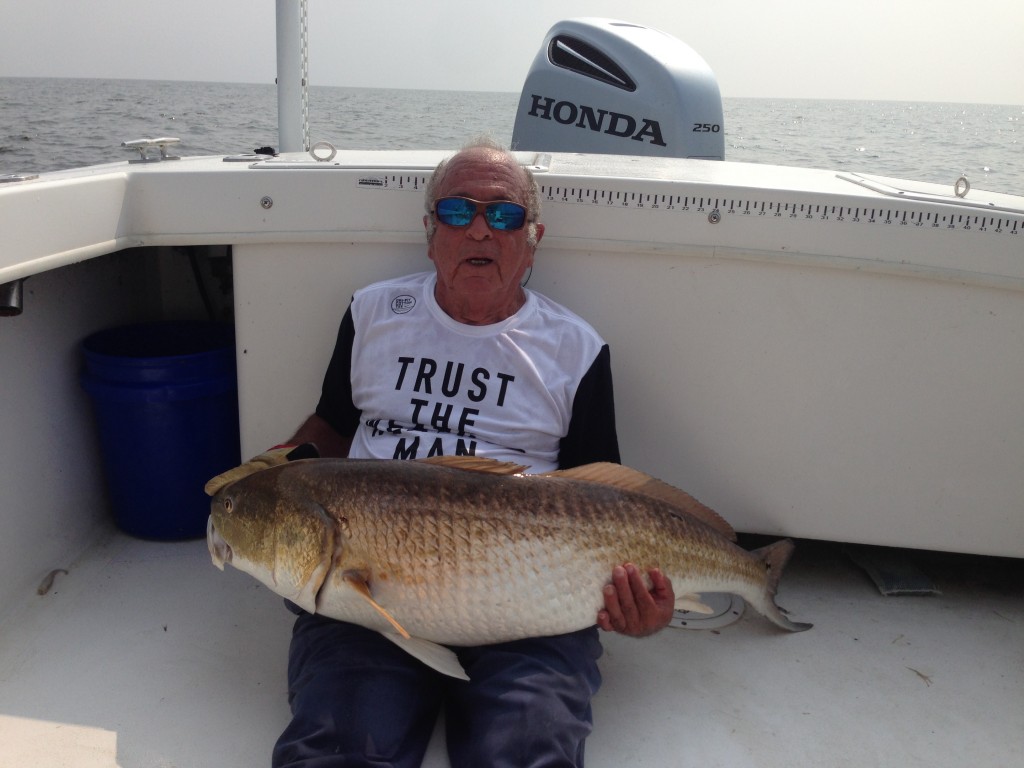 My Buddy Bill with the light tackle fish of a lifetime!!!!!

Incredible light tackle fishing to say the least!  My good friend Billy had one heck of a day recently…..he caught this gigantic Bull Red Drum on a 6′ medium action custom rod from Shore Tackle at Kent Narrows and a 1 and 1/2 hardhead custom baits “Minnow” jigging spoon with chartruese glitter color.  Earlier in the day we hooked up with an incredible catch….a 25″ beautiful spanish mackeral on the exact same rig.  Billy plys the waters with me often and has many incredible days but this one was extra special! 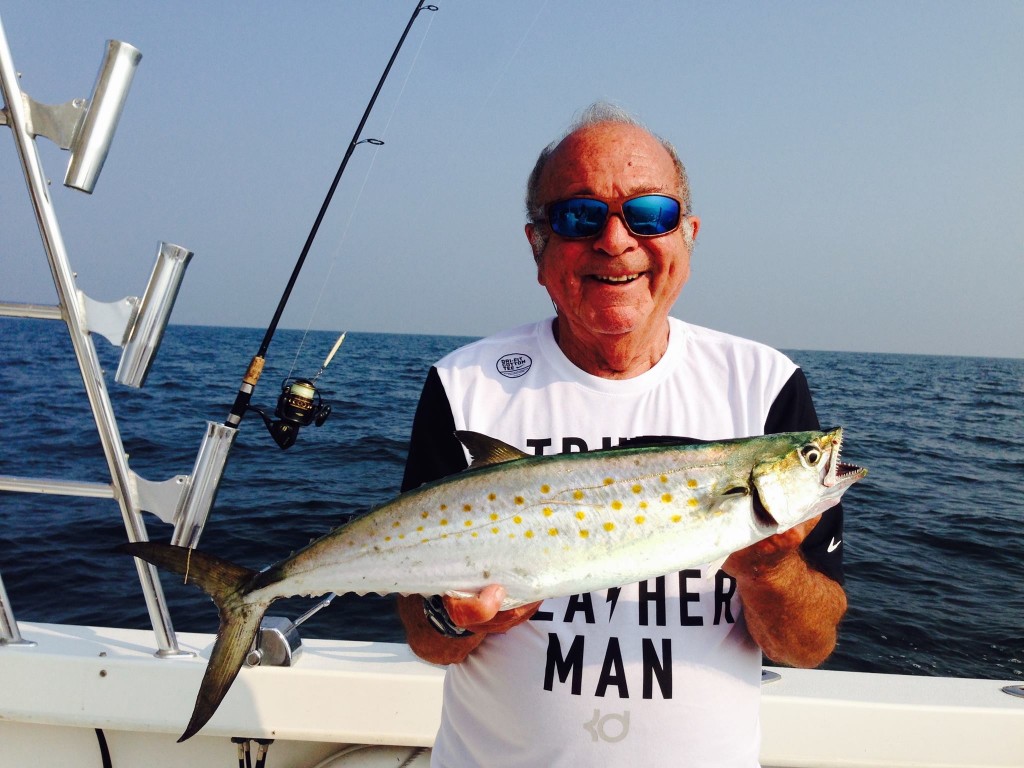 25″ Citation Spanish Mackeral on a jig!

This day was just one of many days of incredible fishing from Sharps Island south to Cedar Point out of Solomons.  I wish it were easy everyday but it isn’t……if you fished with me 10 days in a row you would see some different things everyday.  Darn fish have tails and move from day to day chasing the masses of silversides around the bay from deep to shallow and back again.  Binoculars are my best friend right now for sure.  I’ve been looking for the slightest hints of fish through the binoculars.  Most days I’m finding it quickly and consistantly the entire day.  On a few days it was tough and hunting was a major part of the trip.  Once f0und it is game on!  On my friend Bills day we had to really hunt.  Spent 2 hours of running and not catching. Finally I found a few fish in an area of structure where I’ve had fish but no birds were present.  We marked a few fish and decided to give it a quick shot.  Right away we started hooking small stripers and decent blues.  On one cast a large fish grabbed a Hardhead Custom bait “minnow” jig right near the top and started ripping drag…….that’s the fish above……a nice Mac.  On this day we still hadn’t located a large slug of fish.  I decided to run way back to the west and look in a region that’s held fish in the last week.  With no boats around and a flat sea I located a serious load of breaking fish with a few birds and that is where the Big Bull Reds were hanging.  Historically I”ve caught many through the years under feeding Bluefish…..easy meals of spit up or injured baitfish falling down to the waiting huge Drum.  Hadn’t had any lately but knew some were in the region from others caught by charters.  As I was working in a decent blue I saw a huge Red blur fly by the boat as I lifted the blue out of the water…..as most know……ya….I get excited.  I did get excited telling my guys REDS ARE HERE!!!!!!  Get your lines in!  They did and we did get lucky!  Here’s another Red caught by Bills friend Mort….. 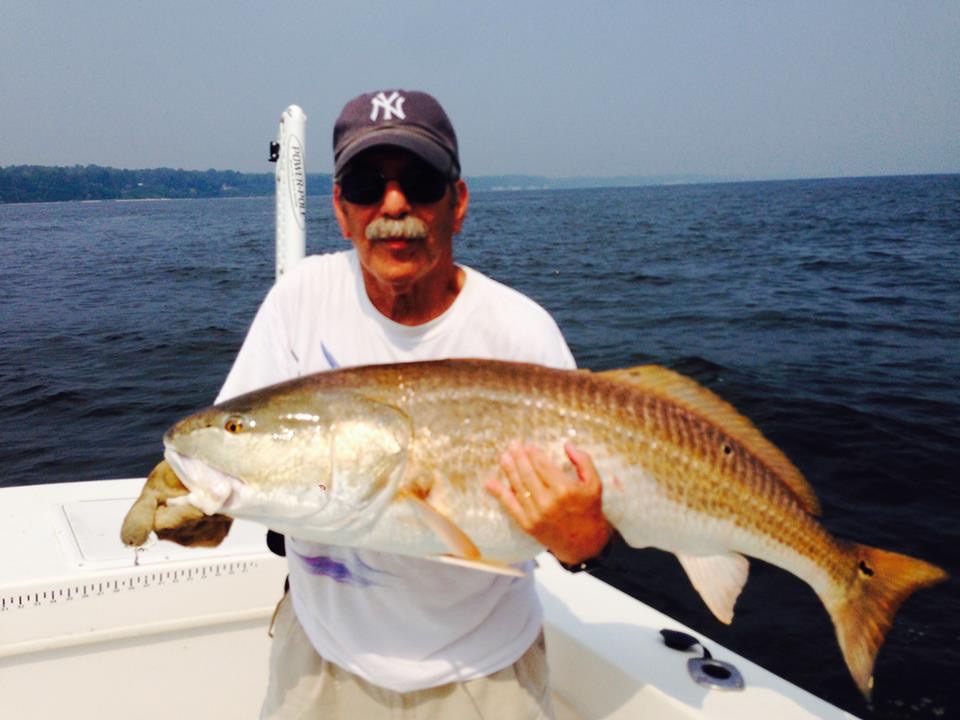 Catching these big Reds is certainly possible but absolutely a “low odds” game.  Locating large schools of active Blues and Stripers is the key.  Anyhere in that area big Reds could happen.  Ya never know! 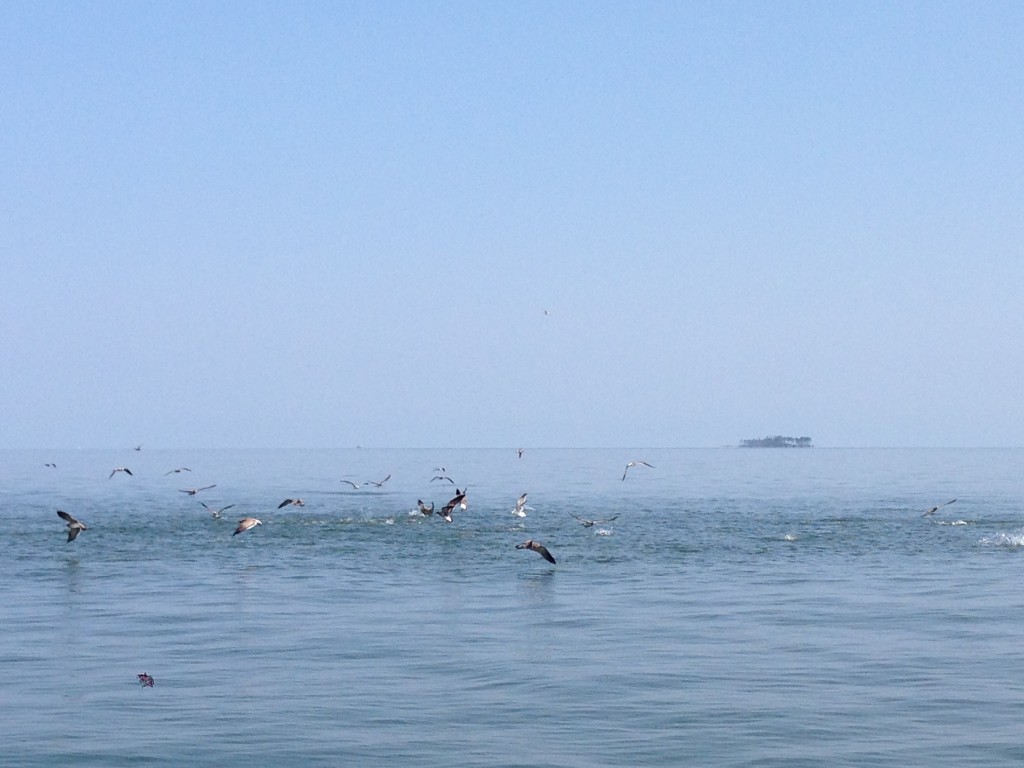 you never really know what may be lurking below!

On the last day of August I had the absolute pleasure and thrill to meet up with a guy who was just a kid the last time we were together.  I grew up in Camden NY a small, hard working town where everybodies dads worked hard and moms were wonderful.  Rick’s (Koz) and his family was just like mine…..mom, dad and the kids growing up in a small upstate town  Money was not abundant in our home town but playing sports and having great friends was for sure.  Koz is 6 years younger than me….so, when I was say, 14 he was about 8.  Big difference in “kid world”.  I played about every sport and took little “koz” under my wing and helped pushed him along.  He has great older brothers for sure and I was like one of them except I wasn’t his brother.  I really pushed that boy hard……and he excelled with support of his family and some heavy prodding from the older neighbor guy.  Koz had some serious vigor about him…..he kept up with the older boys at all the sports we played….baseball, football and Koz wrestled too.  Summers were spent outside playing a sport all day everyday unless it was raining…..then we pouted, praying for the rain to stop.  I was happy to be in Koz’s life back then and his older brothers Paul and Craig.  I graduated from high school in 82′ and departed town.  Koz was only in 7th grade or so at that point.  I saw him a few times after that and knew he was excelling in sports and turning into a spectacular young man.  As life goes…..people do different things and go in all kinds of different directions……as with many….Koz and I went our seperate ways and life moved along.

Fast forward to early august…..I recieved a call from an upstate NY area code and quickly answered the phone…..It was KOZ!  Long story short….he was coming to the bay region and wanted to take his two boys and wife fishing.  At 7 and 10 the boys are very excited to go on a boat and give some fishing a shot.  As luck would have it August 31 was right in the middle of some great surface action fishing with thick schools of eager fish ready to rumble.  Our day was not starting off easy like I had hoped.  Had to really hunt down some fish…..running and looking was happening for a bit…..finally located some fish in a quiet nook of the eastern shore.  We caught here and there and then IT happened.  The mother load of breaking aggresive fish in a remote area all to ourselves….nothing but billions of fish all around us……Koz and his family were mesmerized by what they saw…..kids laughing, wife giggling and Koz was in catching heaven…..so glad this trip turned out so well.  Koz even caught a “citation” sized Spanish on a jig! 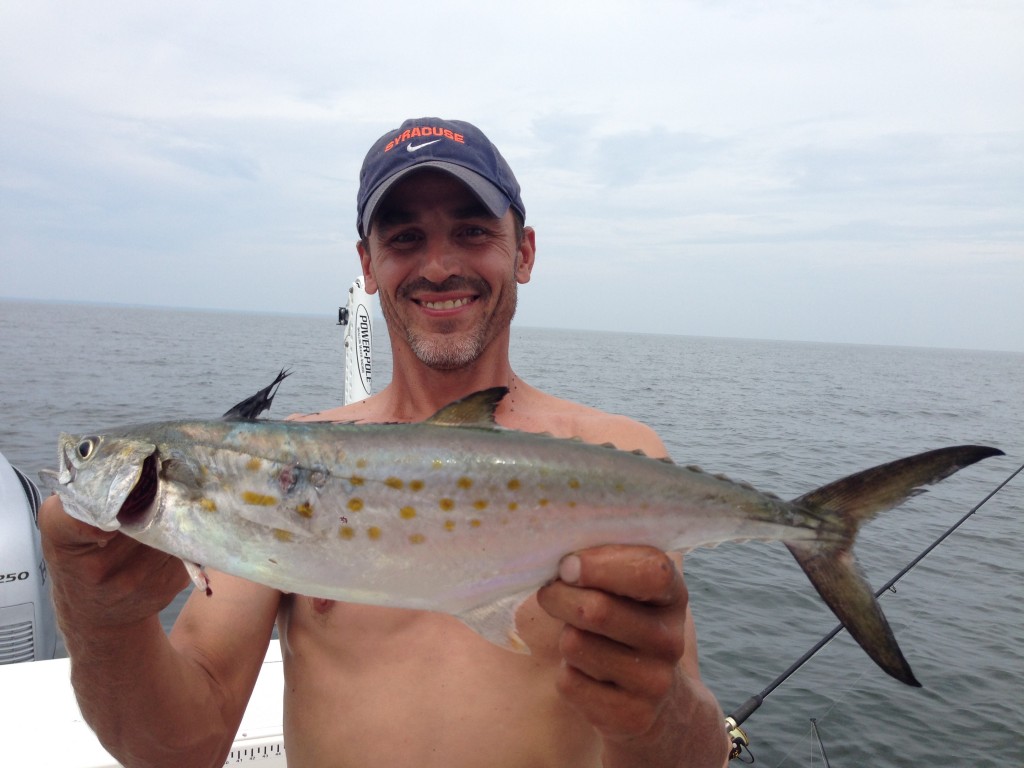 My buddy Koz with a great Mac! 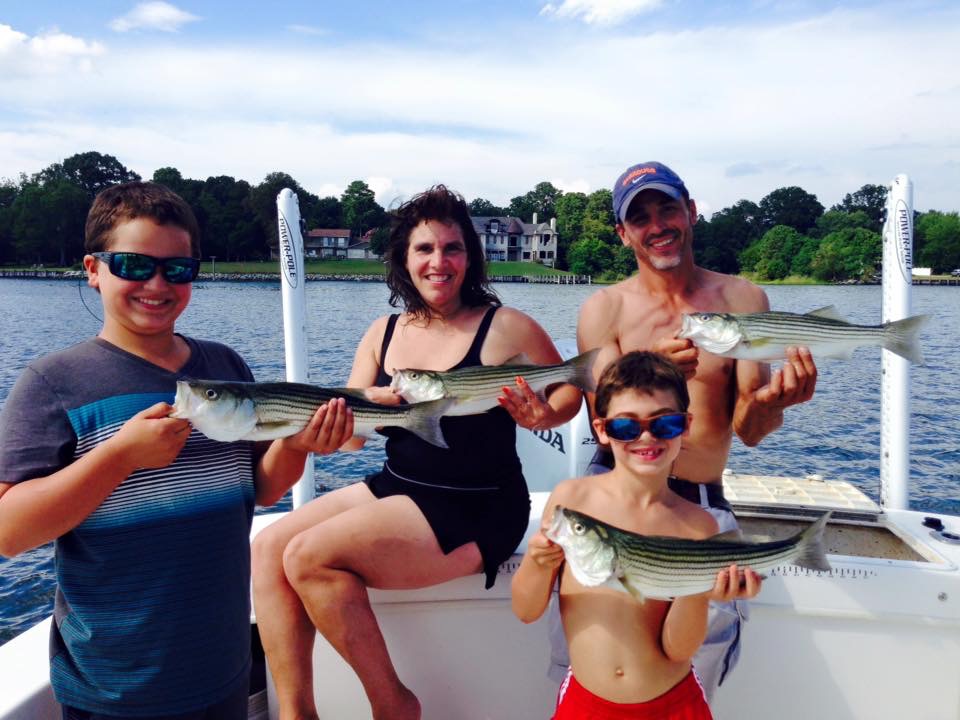 Was a great day with the Koz’s!  Until we meet again brother!

Did 14 straght days of guiding……moral of the story was covering water, observing and not giving up.  Some days were easy…..some days the “big boy” pants were on and I had to work!  It’s been a spectacular late summer run of breaking stripers and blues, Spanish here and there and now a big RED surprise.  You never know! 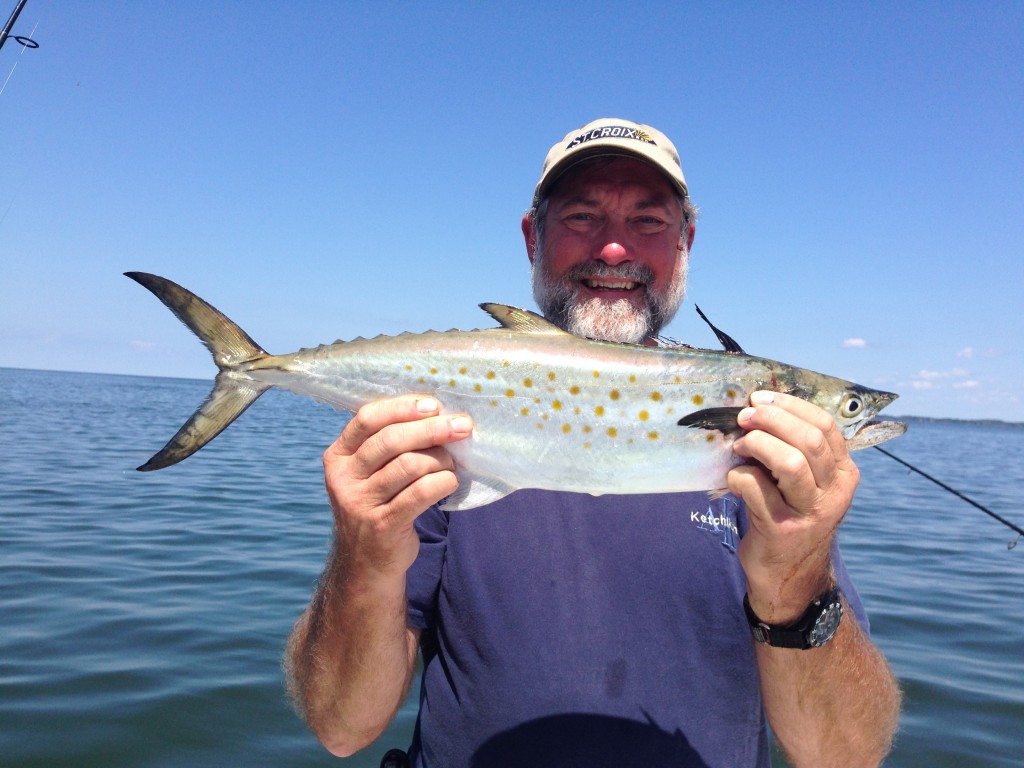 One of several Macs lately 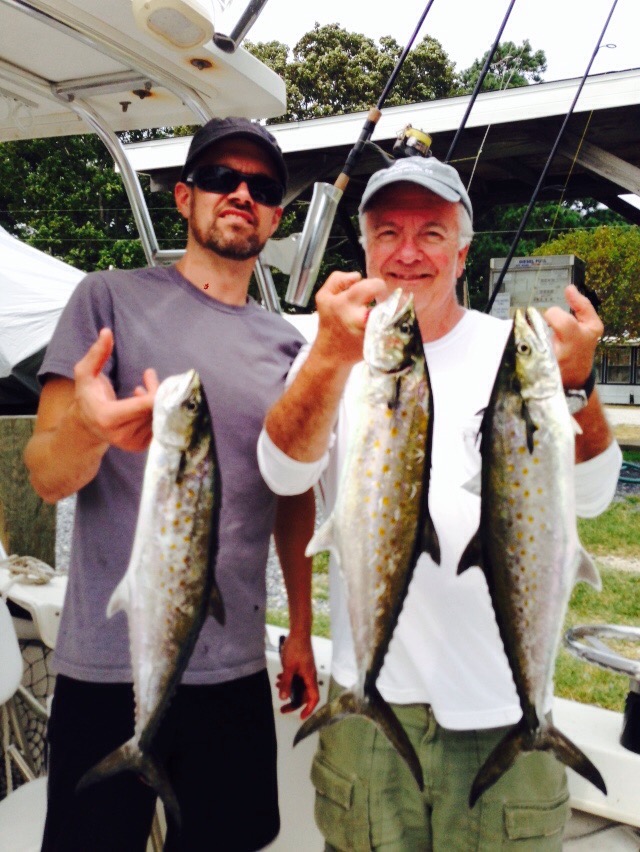 Macs on the light tackle!

The main stem breaking fish bite with macs mixed in will continue until we see some cold fronts cooling the water.  With heat forcasted this week the mainstem of the bay is where it’s at.  I will be exploring the islands soon but not until we see a bit of a cool down.  The islands are coming for sure….just a matter of when!  Can’t wait!  Here’s a quick blast from last years island fishing……the best September/October I’ve ever had over there! 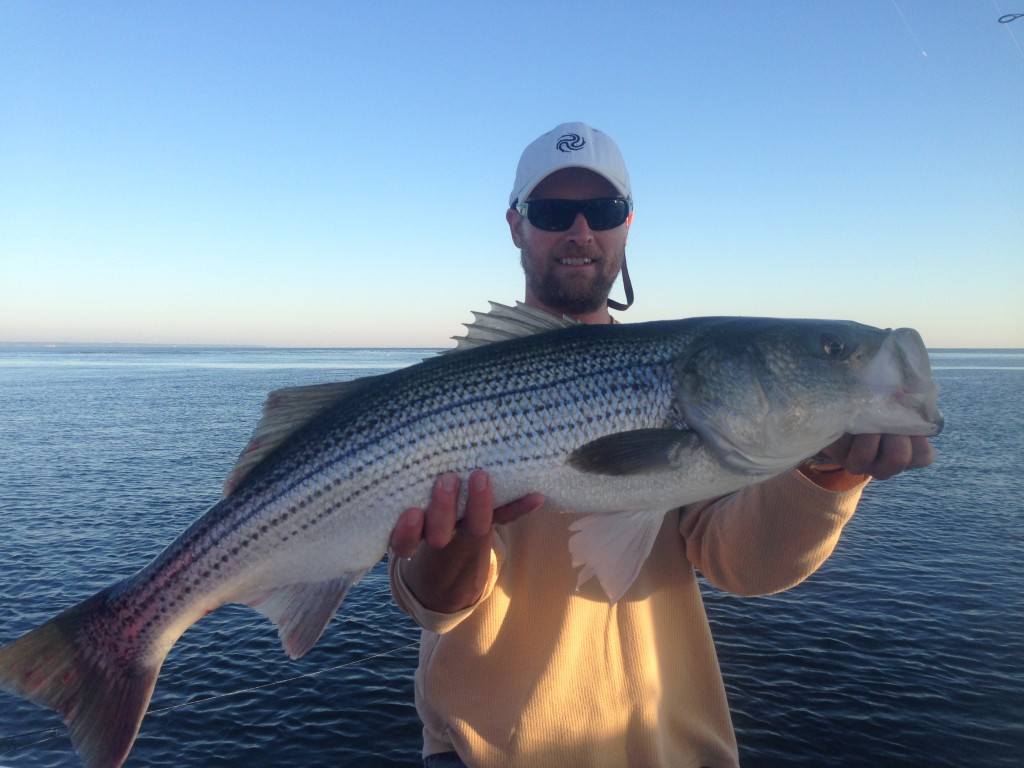 Big fish in the stumps and grass beds……come on cooling water!

We will be launching from Beacon Marina at Solomons, 260 Lore Rd, Solomons, MD.  The comfort inn is right there next to my boat and Anglers Restauarant.  We will launch at 6am and return around 2pm.  I will fillet all fish at the end of the day.  We’ll be on the main stem looking for activity.  It’s been very good so chances are great to hit things really well.  All light tackle all the time.  Weather forecast is great for tuesday and wednsday right now!  Fingers crossed it stays that way!

I provide all licensing, tackle, baits, ice….bring what you want to eat and drink, bring your own rod/tackle if you want

Launch at 6am, return at 2pm or so

Fishing outlook is very good…..come on out and give it a shot! 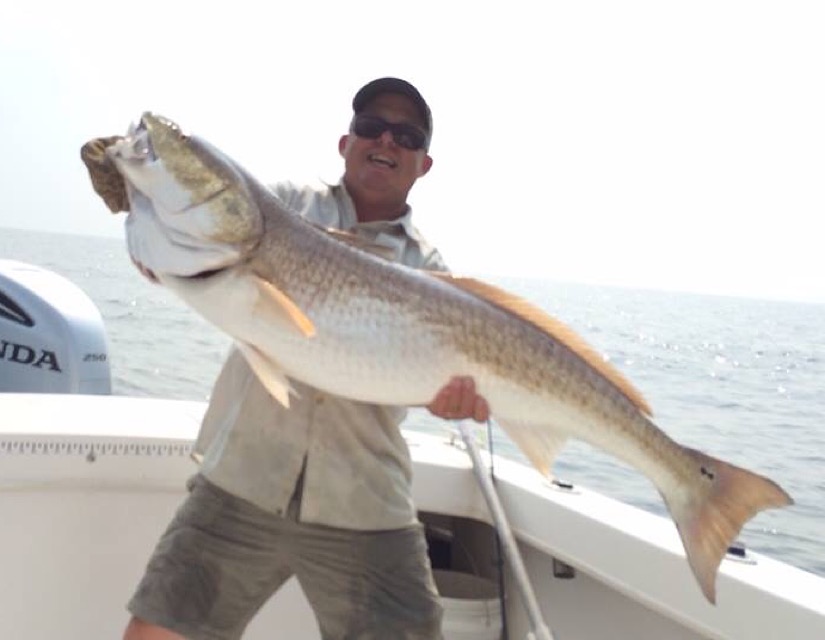 Even I get lucky on occasion!